As some of you know, we are in Zurich, Switzerland, for a week. Then we go to Paris, France, for a week and then to visit one of Robn’s brothers and his wife in central New York, for about 8 days. Then the Pacific Northwest (PNW), for a few weeks, then Trinidad for the Winter. 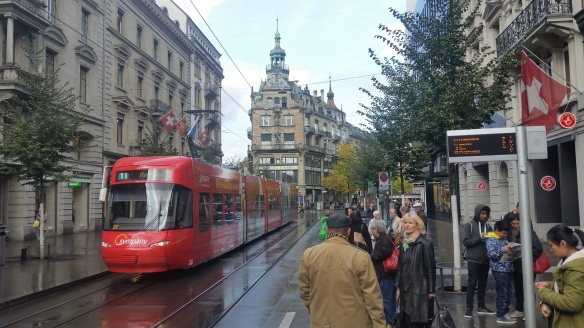 We are in Zurich, because it costs much less to fly from our boat in Turkey to NY, by way of Zurich. We save a few hundred dollars and get an excuse to see Zurich, Paris and some places in between. But, briefly. We hope to return.

We found an AirBnB in Leimbach, in the suburbs of Zurich and are loving it. We arrived Monday the 17th but they were out of SIM cards for our phone at the Airport, that made us late enough that the excellent bus and train system would give us EXACTLY one chance to make several connections and schlep all of our luggage to the AirBnB before our host had to go to work at 5PM. And, with no SIM cards, we could not call him.

So, we took a cab. OUCH! About US$83.67 for a 25 minute ride. We had a 2 hour ride in Turkey from the boat to the Airport for US$75.26, because the much less expensive bus, does not leave until 6AM and then you need to make connections for the bus from the bus station to the Airport and it had to work PERFECTLY, or we would be late for the flight. Deja vu.

We then had to go back to Zurich the next day on the bus and train to get our SIM cards. At the bus stop, we asked a Swiss woman about the way the tickets worked and she spoke excellent English and was going to nearly the same place, so, we had a great conversation with her and she invited us for supper!

She told us about a tram that we could ride for free with our ticket that gave us a ‘tour’ of the city, so we did. And then to supper and got to meet her English husband. Wonderful folks.

She also suggested a walk all of the way from downtown Zurich, back to our AirBnB along a nice and mostly very rural river. The weather has been cloudy and often light rain, but we were OK on Wednesday the 19th with raincoats and umbrellas. We got a glimpse of one of Google’s giant office buildings. We were told that they have a LOT of their offices in this area. 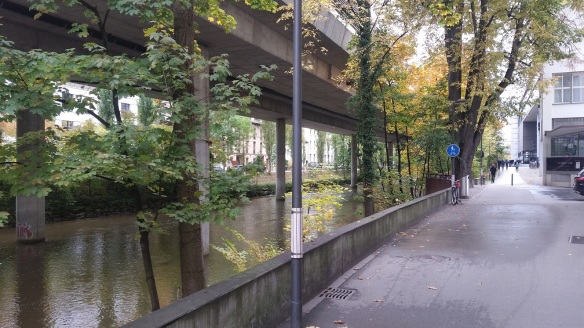 This photo above is in town.

This is halfway to the AirBnB

Then, today, Thursday the 20th, it was often sunny, so, we wanted to hike the mountain ridge near our AirBnB. Our host offered to drive us to one of the Trail Heads.

There we were quickly reminded that Switzerland is rather badly wrinkled in some places. This was one. We old people had to climb about 220 meters vertical in about 600 meters horizontal distance. Whew!

Then, we climbed another 100 meters in 500 meters along the ridge. Better, but we had not exactly recovered from the first part. 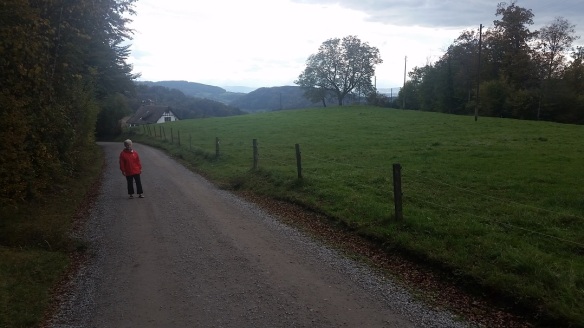 We rested a little and then went about 4 or 5 km along a very nice trail/gravel road along the fairly level ridge and then down a steep decent to the AirBnB. 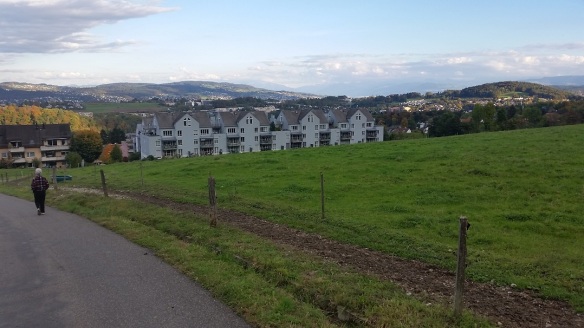 It is so beautiful here. Zurich is a very old city. About 2,000 years ago, the Romans gave it a boost, but the location is so good for farming, fishing, logging, and trade, that I assume that something has been here far longer. Yet they keep LARGE, well managed forests and farm land, often organic, very close to the city center and LOTS of folks of all ages are out walking, even in the rain. So nice to see people care about their environment.